*NOTE: Genos cannot have their names changed, as their names store important information about their identity. Once they are designed and approved, you will be able to use this guide to edit their name.

To edit a colonist's name, you must click "Edit profile."

There, you will be able to change the name, the short descriptor that shows up on your colony page (user profile) and add your own profile text and decorations for the Profile page.

To be clear, the profile page is not the info page, it's in the tab called 'profile' to the left of the main colonist page. 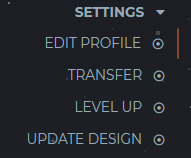 If you have a geno, you will need to submit a "GENO DESIGN" via the character's page sidebar, before you can begin earning levels for the character. If you attempt to include the colonist in a Submission (either via a Claim or a Prompt,) you will not be able to find the geno in the list. 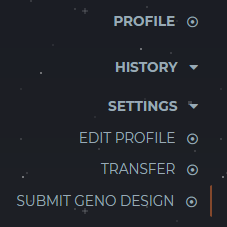 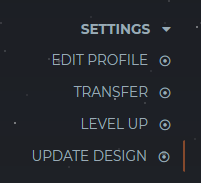 The next page you see will be this. It'll be a bit different if you're updating an existing design, but the idea is the same. Hit "Create Request."

The request has been created but is currently a draft. You will have to go through every one of the tabs below (Comments, Masterlist Image, etc) and submit each to be able to submit the final request to the admins to approve.

On that first Comments tab, you can leave it blank if you don't need anything special for the colonist.

Make sure you save the page and the X in the tab is replaced with a green check or circle.

The next page is important. This will be your design, which of course you'll need to make in accordance with the design guide. We don't have any required backgrounds except for Natives currently, so feel free to use your own backgrounds, so long as you have permission to use them! The file has to be below 1 MB in size otherwise the site will complain and make you redo the image.

Note: There's currently a bug with the Cropper used by base Lorekeeper where if you select 2+ images, the Image Cropper will have multiple images visible and croppable. The last one should be the one to save, but it can be pretty confusing so try to select the first one in your first go or refresh/switch tabs if you need to clear them to retry. 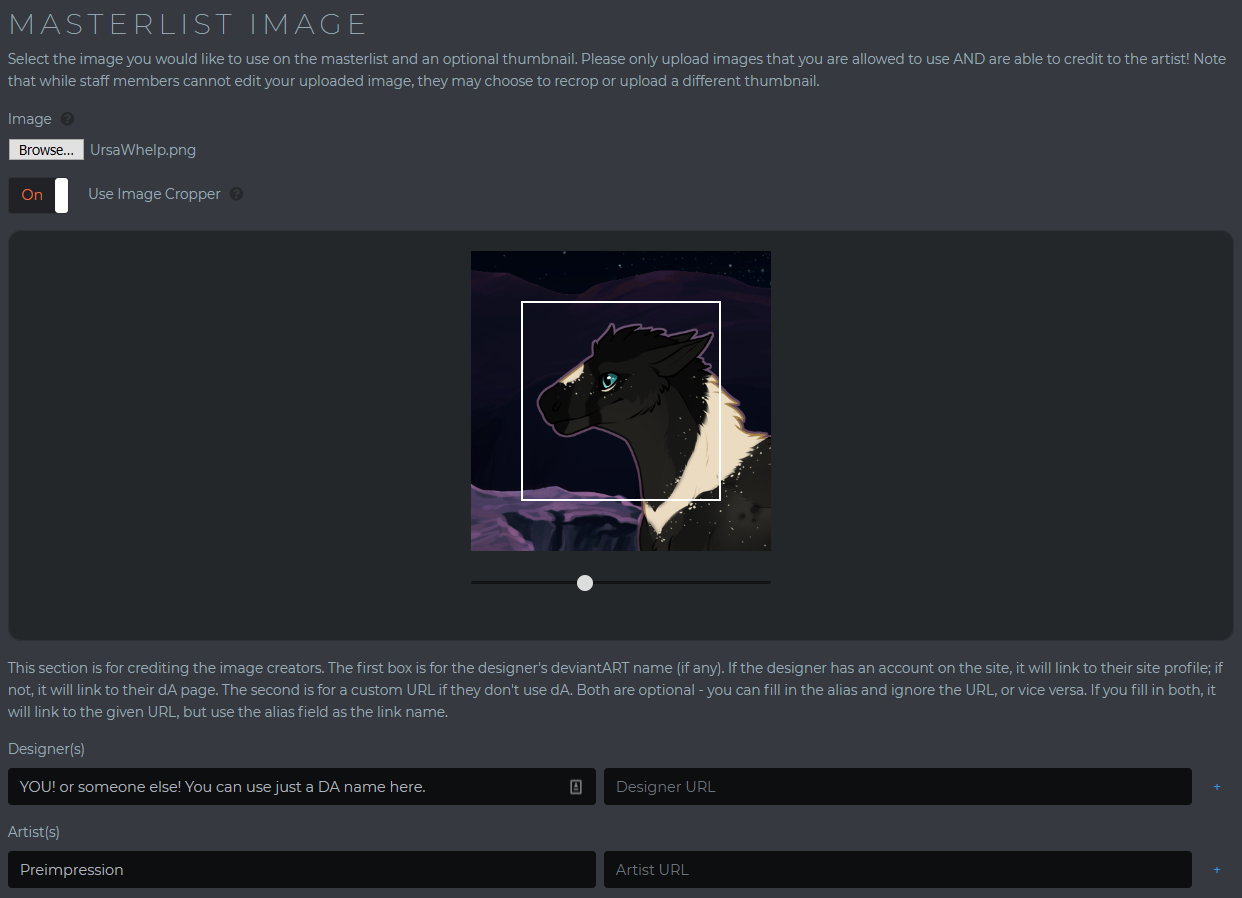 If you have an item that you want to use to affect the design update in some way (such as an item that permits design changes or adds a mutation) you'll need to add it on the Add-Ons tab. As it states, the item will be removed from your inventory but should be returned if the draft is rejected. So don't willy-nilly add stuff!

Just hit save on the Traits tab, unless you had an item that added a specific mutation or you want to add a free defect such as Blind or Deaf.

If you've saved all tabs, there should be a check next to status! Head on over to that tab and hit Submit Request. Then you can sit back and relax - it's up to us admins to handle it from there! 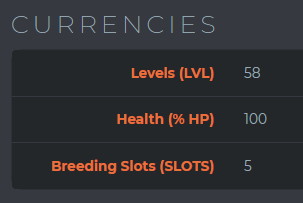 Specific colonist attributes are kept in the colonist's bank. Particularly Breeding Slots or how many times your colonist can breed, although things such as Level and Health used to be held in this location as well.

If you had a colony on the original Sheets masterlist, you should link to your Sheets colony.

If you have an item in your user inventory that can be attached to colonists, for instance Background Images, you may attach them by selecting the item and in the modal, hitting "Attach" and attaching the item to a colonist. Some items, such as backgrounds, can only have one held at a time per colonist. Others, such as little baubles or trinkets with no gameplay components, may not have limits to how many are held by a colonist. You may even have one that hoards different types of a particular item, that's up to you!

Colonists have no "carry weight" as items and currency have no weight.

Every colonist (besides genos) has what's called a Level Area. This is found in the sidebar under Settings and is where you go to level up your colonist or apply stat bonuses.

At the top of the page is an indication that only staff and you can see this page. Below that is the Level of your colonist as well as the Experience Point count and how many points are left before your colonist reaches the next level. If you've reached the top level that's released, it won't list a count there. When you've reached the number of XP you need to get to the next level, go here and there will be a big bright "Level Up" button.

The first stat you can see is the "HP" or Health Points/Hit Points stat. This is out of 100 and will display a percentage of how much health a colonist has. When they're below 50% health, they can't breed, and if they're even lower, they might be unable to do other activities. We will never kill your colonists without permission, so you don't have to worry about a colonist reaching 0% and dying without you being able to save them. We just encourage healing, particularly in the Hospital, to keep your colonists on top of their gae.

Most levels have a "stat cap", usually 20, where you can't add stat points to go over that base stat count. Each stat has a "Base" and a "Level" as well as a little modifier (+0) indicator.

The base of a stat is its inheritable level or the stat without any modifiers put onto it. This is what you look at when you're breeding a colonist!

The level is just how many times you've added to that stat.

The modifier or the number in parenthesis, is the adjustment given by having items such as weapons or gear equipped to your colonist. If a stat is modified, it is the modified state that is looked at to calculate Skills.

Skills are based on individual stats. For instance, Combat uses a modified calculated based on the Strength stat. Just like in some tabletop RPGs, a stat of 10 is seen as "average" and gives no benefit or detriment to skills it affects. Once you go down or up, though, a modifier is calculated. Every two stat points, the skill modifier goes up by one, so a colonist with a strength of 1 would have a Combat skill of -5.

Unlike stats, skills must be initialized before they can be used. This is easy: Just hit the button beneath that skill. We request that you only initialize skills that you will use, but please don't forget! If you do an activity that uses an uninitialized skill, it will automatically believe the skill level is even lower than -5.

Base skill levels may be affected permanently by the Wheel of Mercy or other mysterious ways.