Starsong paced in front of the entrance to the whelp hut.  He wanted to get going before the wind shifted, but, of course, his two young companions for today’s trip were taking their time.  He paused to sniff the air and wrinkled his nose.  He wasn’t sure exactly why Yayaloc had chosen him to track down the source of this problem-- surely one of the hunters would be better?  He didn’t want to disappoint, though, so here he was.  Another sniff and a stamp of his foot.  How could they be taking this long?  Starsong turned to keep pacing and almost stumbled over Iro, the little brown and white whelp who would be helping him out today.  She smiled up at him, so sweet he couldn’t resist smiling back.  “You’re pretty quiet, huh?” he asked.  She nodded, still smiling.  Now he just needed Rose.  Ah, and there she was, slipping out of the entrance to the whelp hut, still wiping crumbs off her face.  Splashes of pink ran down her pale fur like oil, partially covered by the windcloak she wore.  “Ready to go?” Starsong asked the two of them.  Iro nodded again, while Rose turned blue eyes upon him.

“Take a deep breath.  Can you guess where we’re going today based on smell?” This should be a good start to their investigation.  He wanted the whelps to work on their tracking skills, and with the rank odor drifting through the air this should be a simple task.

Rose took one sniff and closed her nostrils in disgust, saying nothing.  Not in the spirit of the exercise, but Starsong couldn’t blame her.  Iro, however, turned her head in the direction the wind was coming from.  “There!  It’s super gross!  Like something died!” she exclaimed.

Starsong nodded.  “It’s a little different from death-rot, but certainly close,” he agreed.  “Let’s go find out what’s making it.”  He led the way out of the Station, Iro bouncing by his side and Rose trailing behind, keeping her nostrils shut as often as possible.  There were few colonists out and about; no one wanted to work with the stink drifting around, and it was too early for most whelps to be out playing.  The wind was coming from the river side of the Station, and as they crested the small hill on that side of camp, the river and its valley came into view.  It rested in a small floodplain, running swiftly through the reeds here but transitioning to wetland further down its course.  Trees dotted the bank, a rare sight in most of Mireh.  The trio of tsabhua made their way down into the floodplain, two sniffing, one reluctantly writing in the notebook she’d brought along.

The stench grew stronger downriver, and they turned to follow it along the bank.  Rose took to holding her breath, letting it out in dramatic gasps.  Even Iro was starting to hold her nose, but Starsong pushed on.  Mud squelched between their toes as the ground grew softer, spindly frondlike plants reaching taller and taller, almost obscuring the whelps.  It was eerily quiet, the aquatic invertebrates that liked to trill in the wetland silent.  The flying creatures that fed on them did not buzz overhead.

Iro led out a yelp that made the whole party pause.  As they turned to look at her, she shook out a forepaw, black and grey gunk scattering from her claws.  She’d stepped in a rotting fish.  Rose snorted as Iro wiped her foot on the grass, lips curled.  Starsong hummed.  Looking around, he could see more fish carcasses.  A large die-off.  That would explain the smell, but….it wasn’t exactly the same as rotting fish.  There was something more earthen underlying it.  He glanced at the whelps.  Rose was dutifully writing in her notebook while Iro whined to her about the experience.  “We’ll have to send a group out here to bury these fish,” he told them, “but I don’t think we’re done here yet.”

“I don’t want to be part of the group!” Iro complained.

“Not done?  Why not?” Rose asked at the same time.

Starsong began to sigh, then quickly thought better of it.  “The smell isn’t quite the same as dead fish.  I think there’s another source,” he explained.  The whelps grumbled as he led them back upriver and across the bridge.  Here the air was clearer, and everyone gratefully breathed a little easier.  A cloying, sickly-sweet and earthen smell could now be made out, and Iro eagerly bounded ahead, Rose taking her place at Starsong’s side.

“I’ve smelled this now and then,” she commented.  “Like when we were out foraging the other day.”

“Did you see what caused it?” Starsong asked.  She shook her head.  They carried on, the scent becoming stronger.  The sight of something up ahead made his steps stutter, and he called Iro back.  A tendril looped out of the ground, black as the rotting fish flesh.  It was dotted, however, with orange, something he hadn’t seen before.  “Stay back,” he warned the whelps, and cautiously moved closer.  He couldn’t tell if this was the source they had been tracking, but it seemed possible.  The specks of orange, tiny against the massive black rope of tendril, appeared to be fruiting bodies.  Little mushrooms.  A wind blew up and the tendril shook, white spores misting into the air.  Starsong startled back and clamped his nostrils shut, but not before noticing that the smell grew much stronger.  He whirled, returning to the whelps.  “Did you see that?” he asked, and Iro and Rose nodded, eyes wide.  “We have to report it back to the colony immediately.  These spores could be dangerous.”  With that, he led them back toward the bridge, ears flat and steps hurried.  The whelps stuck close to him, Iro’s playfulness abandoned, Rose forgetting to act haughty in her worry.  No one knew what the tendrils did, and the fact that they were trying to spread was concerning.  These spores had to be studied. 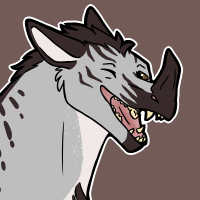 My first investigation piece!  Starsong leads Iro and Rose on a hunt to find what's causing a really bad smell. Rose of the Plains 0470 [Wayward Station]