The Ministry's child, Ara, is about to grow to adulthood.
She has shown an aptitude in combat and will be trained alongside Cetus and Sagittarius as a Recruit upon her Placement Ceremony.

Xione is a colony of two faces, inside and out. The colony itself lives within a hollowed out dormant volcano often called the Obsidian Mountain due to its color, the passages of which are closed to the public. Connected to the volcano is a great Obsidian arch which connects to a structure built to accomodate visitors and house diplomatic parties.

The Ministry (upper eschelon of citizens) are often seeking samples from other colonies to expand their bloodlines, especially those of high stats and unique colorations. Such planned relations may occur in a number of ways: A diplomatic party may approach your colony to discuss and perform, the dam may be artificially inseminated or a surrogate may be found, or your colonist may visit the Diplomatic Center near the Obsidian Mountain.

Xione is a tightly knit colony where the best thrive and the rest are pushed to better themselves. Outside of the colony, few are known beyond those who are trusted by the Ministry.

The Ministry is made up of three highly skilled colonists who have the ear of the Researcher. They have freedom of the entire facility and may leave or return at will, no matter what. They decide upon most things together, although the Prime has the final say in any such

PRIME The Prime has master control over all residents of the colony.
Cepheus "Zero Sum Game"

DIRECTOR The Director is in charge of relations, both diplomatic and domestic.
Cassiopeia "Carried by the Sea"

COMMANDER The Commander is responsible for the defense and offense of the colony.
Delphinus "Ace of Spades"

The Military is responsible for defending the colony from dangers both inside and outside its walls.

CAPTAIN The Captain works directly with the Commander and is the liason between troops and the Ministry.
None Yet.

SPECIAL OPS Specialists are colonists with intelligence and dexterity who are sent on special operations.
None Yet.

COMBAT DOCTOR Combat Doctors are tasked with caring for the injured and damaged within the Military.
Eridanus.

PRIVATE Privates are the main body of the Military Corps and are trained to protect the colony.
Andromeda.

RECRUIT Recruits are newly attached to the Military and must still show their worth.
Cetus. Sagittarius.

Regular citizens are important to the colony. Without them, many of the processes across the colony would never be done.

VOYAGER Voyagers travel within and outside of the colony lands, searching out tresspassers and strangers who are of use.
Aquila. Wyrd.
Juniors: None Yet.

DIPLOMAT Diplomats are tasked with going to other lands to improve relations across colonies and tribes.
Lyra "Song of the Gods". Tsakaine.
Juniors: None Yet.

DOCTOR Combat Doctors are tasked with caring for the injured and damaged within the Military.
None Yet.
Juniors: Aquarius.

SCIENTIST Privates are the main body of the Military Corps and are trained to protect the colony.
None Yet.
Juniors: None Yet.

ARCHIVIST Archivists are in charge of laying out the history of the colony and ensuring the children are taught.
None Yet.
Juniors: Scorpius.

PRIEST/PRIESTESS Recruits are newly attached to the Military and must still show their worth.
None Yet.
Juniors: None Yet.

CHILDREN Recruits are newly attached to the Military and must still show their worth.
Lupus. Ursa. Ara. Cygnus. Achernar.

PRISONER Prisoners have done something to offend the Ministry and must pay for their crimes.
None Yet.

The Lore of the colony is that which is taught to the whelps and is that spread outside of the colony. It may not be entirely truthful, but they won't tell you that.

Cepheus, Delphinus, Cassiopeia, and Ash were all originally from the same tribe. Cassiopeia became pregnant with Ash against her tribe chief's orders and the pair were de-horned. The four were furious and were forced to flee, escaping from further punishment or even death. They all traveled together for some time, until a dangerous storm swept Ash away.

Xione is currently open to alliances and trade treaties.

A visual history will eventually be here. This will be the canonical history of the colony and may be in the form of comics, text, or images. 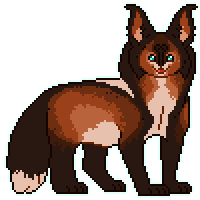 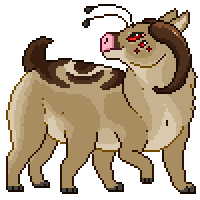 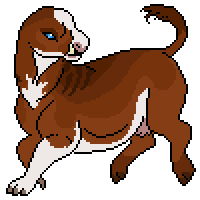