Usually, markings should be from the same colour family as the base coat, but the following ranges are also allowed.

Eye colours, except when explicitly stated for a species, can be any colour except for extreme black or extreme white. They can be unnatural colours without any need for an item or inherited colours. While tsabhua pupils are generally slits, belemoid pupils are more often than not round. They both can expand to be quite circular in reaction to light or emotions but there should always be some sort of iris colour visible.

Heterochromia, regardless of complete or segmental, is also freely available for any colonist, unless there is a restriction on the species.

Albino colonists should have eye colours from the following general colours: red, pink, or blue. Also, keep in mind that the skin colour can peek through!

As of March 2020, colonist's claws and skin must always be darker than the fur they're touching. They also should be either similar to the base coat near them in saturation and coloration or natural in shade. Remember that fur colour is dictated by skin colour in most cases, so a hairless colonist with white spots will have areas of darker skin and areas of lighter skin. Horns can be darker or lighter than the markings around them. They can be ivory, black, white, or similar natural colours.
They can also be affected by markings on the body, even if they are near the tail or affected by artifice.
If you have artifice, you may pick just the horn as your affected body part/marking if you would like!

Minimal white and minimal black are available for any colonist, unless they have another gene that supresses these markings. These use the colour ranges from Free Ranges above and must never be true white (#FFF) or true black (#000). These markings should be solid unless affected by the modifier ticking and must be at least somewhat hard-edged for the majority of the "marking." 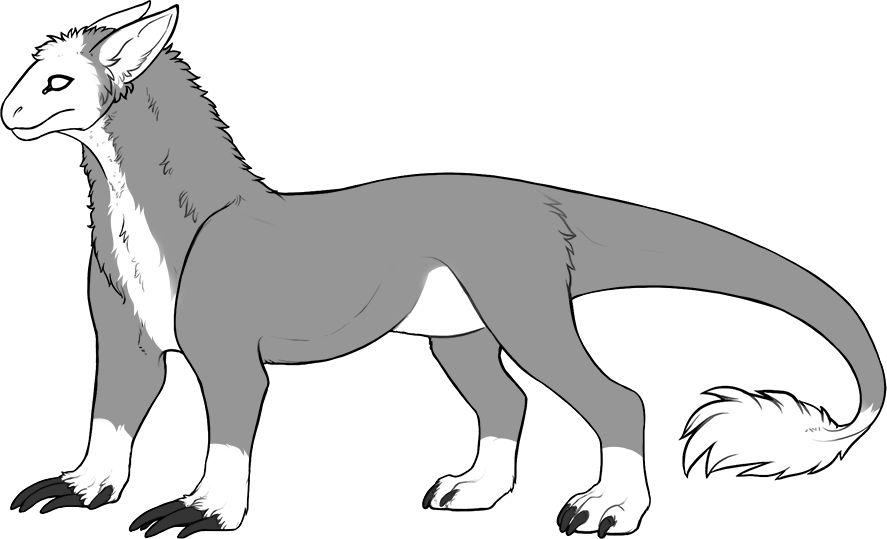 What do the Boxes mean?

These ones are pretty self-explanatory. They should be lighter or darker than the base coat colour but should still be
from the same colour range, unless otherwise mentioned or unless using the free colour ranges from above.

These boxes refer to whether the marking can have holes in it or must be solid.

Solid markings mean they should generally be one continuous marking with no holes.

Big holes means that the marking has large, bigger-than-eye, holes throughout it.

Little holes means that the marking has pinpricks of holes or snowy spots, depending on the marking itself.

These boxes are specifically related to the outside edges of markings. Notice that we allow fur-texture on all markings unless otherwise mentioned.

Soft means that the markings are lightly blurred into the coat. Think of using a soft brush.

Blurred specifically refers to very blurred edges. These can have some texture or you can use an airbrush.

One-toned markings have one consistent colour throughout. They usually can have subtle gradiation but it should not be very distinct.

Two-toned markings can have two completely different tones or shades of a similar colour.
They should be related or from the same family, usually, but when affected by artifice, these markings CAN have two different base colour families.

Mapping is a special edge type where it's almost as if the outside edges of a marking bleed out in a
lower-opactity area, generally following the same or similar edges as the marking itself.
Most White Spotting genes allow this by default.

A phenotype is the written-out explanation of a genome, whereas the genome or genotype is the list of allele pairs used for breeding purposes. Note that in the phenotype, if a gene is within parentheses (like this), it means it is carried, not shown - these colonists can't have the markings visible but they may pass them on to their offspring!

As new genes are added frequently, the genome may look long and confusing, especially to someone more used to ARPGs that only list the visible or carried genes. We prefer to show the entire genome for the ease of our rollers, as that keeps different species on the same base starting point. We also separate the individual chromosomes in each pair with a space for most genes, besides the first two lines of the genome.

The first seven genes on the genome are always the same: The sex chromosome, the colour complex, the greying gene, the cream complex, and the genes for flaxen, countershading, and dun.

For the sex chromosome, we use Earth Mammalian terms. XX is female and XY is male.

The colour complex is more complicated - this consists of four pairs of alleles that match up to determine the base coat colour. There are several other genes that affect the base coat, such as the cream complex or other modifiers such as greying or countershading, but these four are the most important. Each species has a different set of base coat ranges and names, so it's important to look at the ranges for the species you are focusing on.

The greying gene and dun both follow regular dominance, as mentioned above. A colonist with "G G" will have greying and will always pass it, while a colonist with "D d" has a 50% chance of passing on the dominant "D" allele.

The flaxen and countershading genes are both recessive - in order to display one of the two genes, it must be recessive dominant (cs cs or f f). For markings like these, if they are heterozygous it means the colonist carries the gene and it will be displayed in parentheses at the end of the phenotype.